When McLaren created the 570s, it created a whole new range within its lineup at the same time, named the ‘Sport Series’. The aim was to design and manufacture a supercar focused on delivering "day-to-day usability and driveability" that offered increased luggage space and greater interior storage than McLaren’s usual, more track-focused, offerings. It’s safe to say, with the 570s McLaren achieved its aim.

The 570s is a sports car that’s somehow comfortable and sedate (well, as sedate as a McLaren can be) around town or on the motorway, but incredibly focused and responsive when the time calls. Make no mistake, even though you can use this performance car every day, it is blisteringly quick. 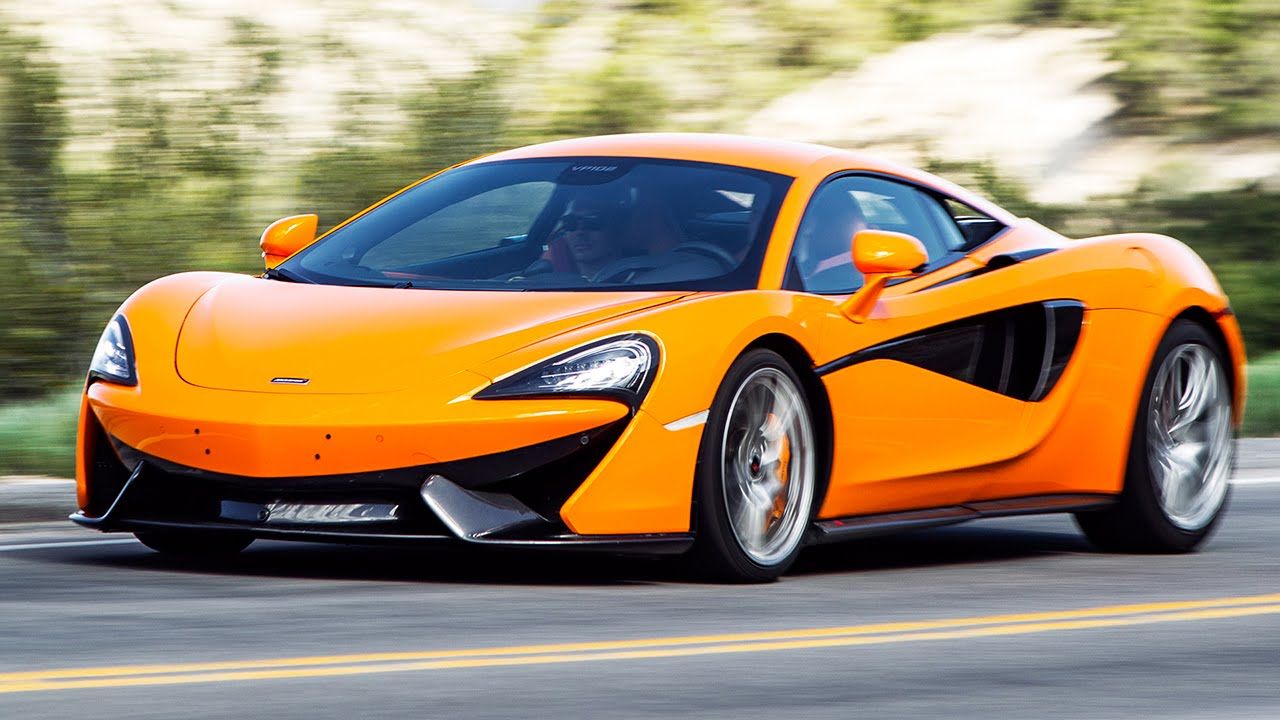 The McLaren 570s is powered by a new iteration of the 3.8-litre V8 twin-turbo engine found in McLaren’s ‘Super Series’ stalwart 650S and ‘Ultimate Series’ dwelling P1. For the 570s, McLaren redesigned thirty percent of the engine parts, so whilst the twin turbo engine retains a flat-plane crank, changes have been made to give the car a sharper throttle response than you’d normally get from a twin-turbocharged engine.

The 570s has a traditional sports car layout, with a mid-mounted engine and rear wheels drive. That mid-mounted engine delivers 562bhp and 443 lb ft of torque, all of which is served up through a 7-speed dual-clutch transmission developed by Graziano Trasmissioni. This setup allows the car to accelerate from 0–60 mph in 3.2 seconds and go on to achieve a top speed of 204 mph. A total dry weight of 1,356 kg gives the 570S a power to weight ratio of 428 PS per tonne.

The 570s is lightweight courtesy of the technology it shares with its Formula 1™ family members: a carbon fiber construction. Weighing just 75kg, MonoCell II is an incredibly lightweight and strong chassis that provides immense rigidity and stiffness. As well as providing outstanding driving dynamics (and allowing the 570s Spider to be as phenomenally quick and dynamic as the coupe), the lightweight construction combines with the potent V8 engine to give the 570s its class-leading power-to-weight ratio. 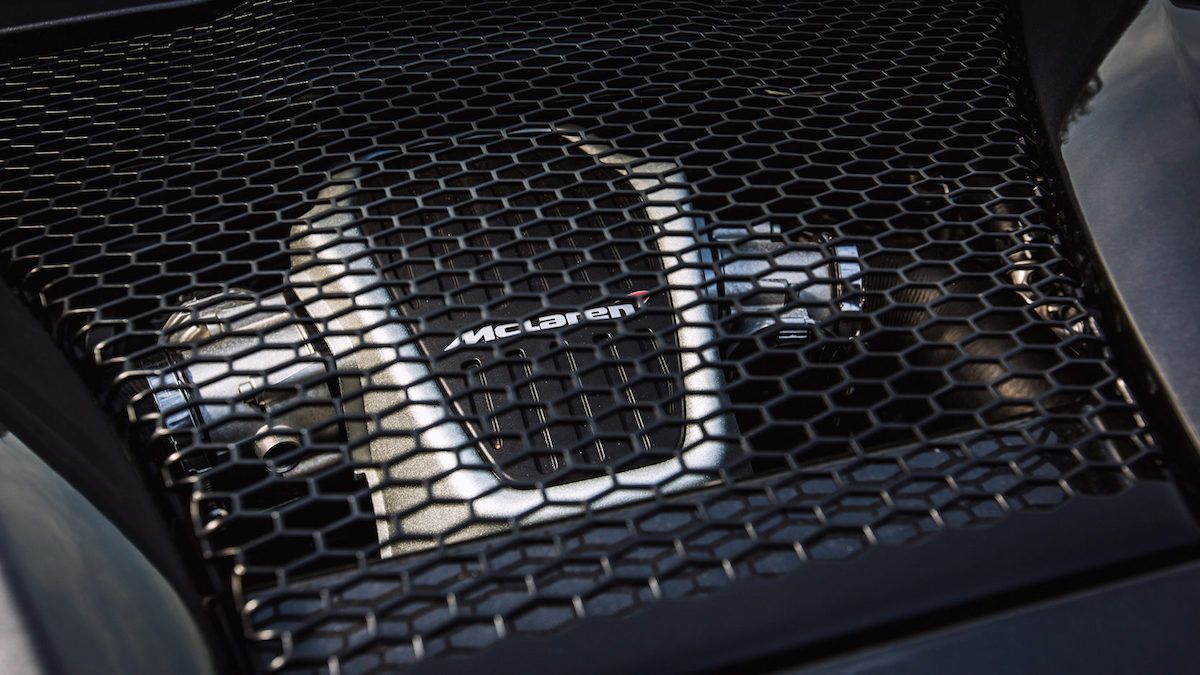 Examine standing quarter-mile times and you’ll see just how quickly the 570s eats up the road. With a time of just 10.9 seconds over the petrolhead’s favourite sprint distance, the 570s is just 0.1 seconds slower than the legendary McLaren F1 and only half a second off the pace of it’s supposedly more focused sibling, the 650s. Looking outside of McLaren, the 570s is quicker over the distance than a Ferrari 458 Spider and a whopping 0.8 seconds quicker than the Mercedes-AMG GTS.

The 570s delivers a solid power hit all the way up to the top of its 8000rpm rev range and is happiest when being pushed. The dual-clutch gearbox offers seamless gear changes and the carbon-ceramic brakes offer plenty of stopping power. Grip comes courtesy of Pirelli P Zero Corsa tires, that help pin the supercar to the road.

The teardrop-shaped cockpit of the 570s is designed with aerodynamics in mind. The car doesn’t feature a downforce generating rear wing in the pursuit of overall speed and instead focuses on dynamism and precision handling. So all you’ll find at the rear of the car are the slim P1 inspired LED tail lights and diffuser. In both coupe and spider form, the 570s features the now trademark McLaren dihedral doors. 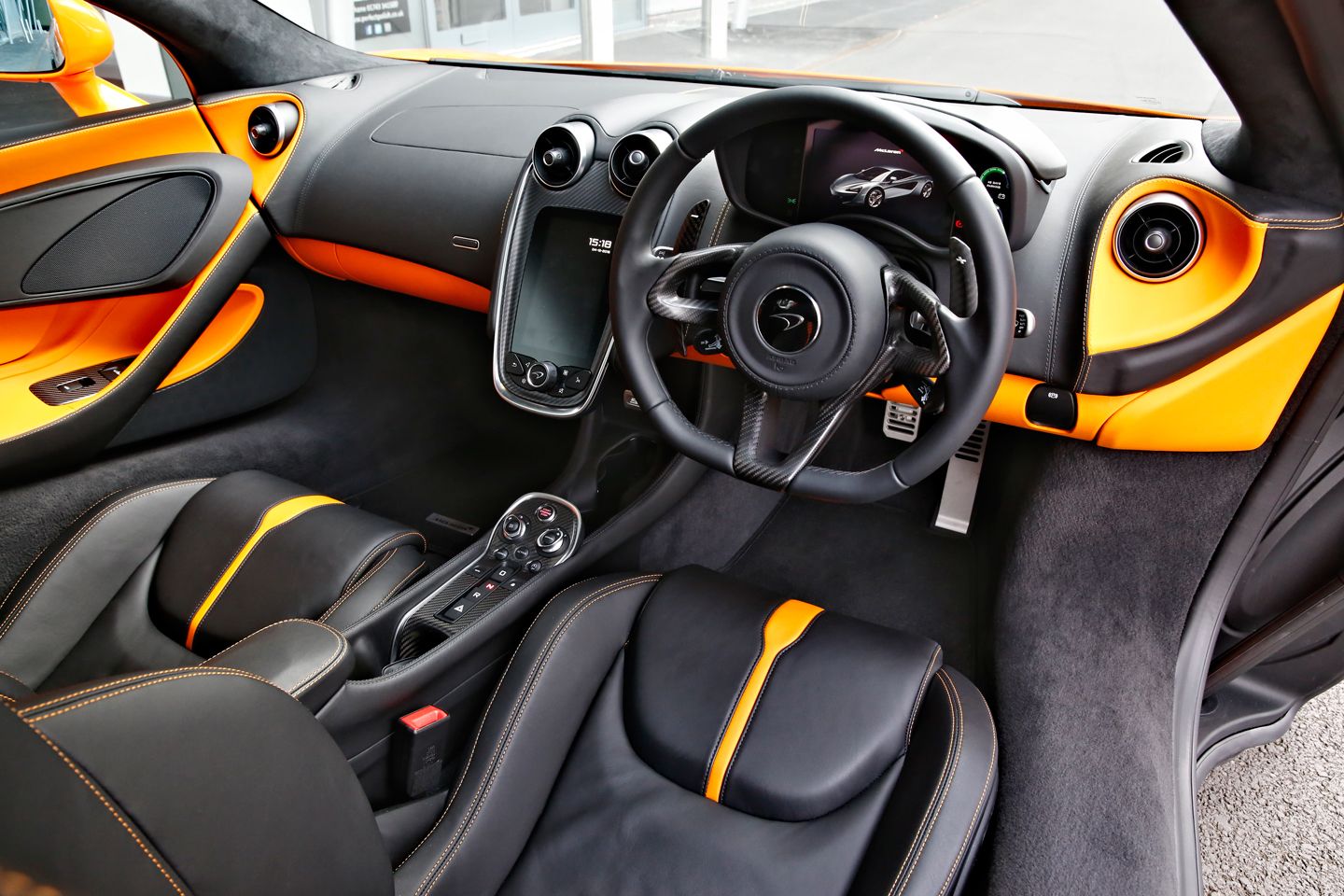 In the past, McLaren could be accused of putting more effort into the engineering and design of the carbon-fibre tub than the area that sits above it. Not so with the 570s, which benefits from a level of styling, spaciousness and quality, rarely seen in McLaren’s of the past.

In many respects, the 570S’s cabin represents a step forward for McLaren, who’ve even gone so far as cutting down the sills of their precious carbon tub by 85 mm to allow for easier ingress and egress via those phenomenal doors.

A Touch Of Luxury

Once inside and settled into the driver's seat, you’re greeted by a new digital instrument cluster and centre stack console. Gone are the knobs and buttons of the centre consoles of the past, nowadays it’s a 7.0-inch screen and IRIS system of McLaren’s own design.

Whilst the 570s isn’t going to win any awards for practicality - this isn’t a wagon at the end of the day - conscious efforts have been made throughout the supercar to improve convenience. This is the daily-driver McLaren performance car, after all, so there are smart, user-friendly storage areas dotted about the cabin and a shelf behind the seats for bags. The luggage compartment in the front of the car provides enough space for a couple of overnight bags and allows for a full weekend away with the car.

There are multiple touches throughout the vehicle that feel very McLaren. For example, when shutting down the vehicle a gauge appears to tell you how long you can leave the car parked before the battery drains. The switchgear, particularly the stalks around the steering wheel, is wonderfully bespoke. Step into an AMG GTS and you’ll see buttons that wouldn’t look out of place on a Mercedes-Benz C-Class, not so on the 570s. It's partially due to all these interior improvements that the McLaren earned itself a spot on our list of supercars you have to drive in your lifetime. 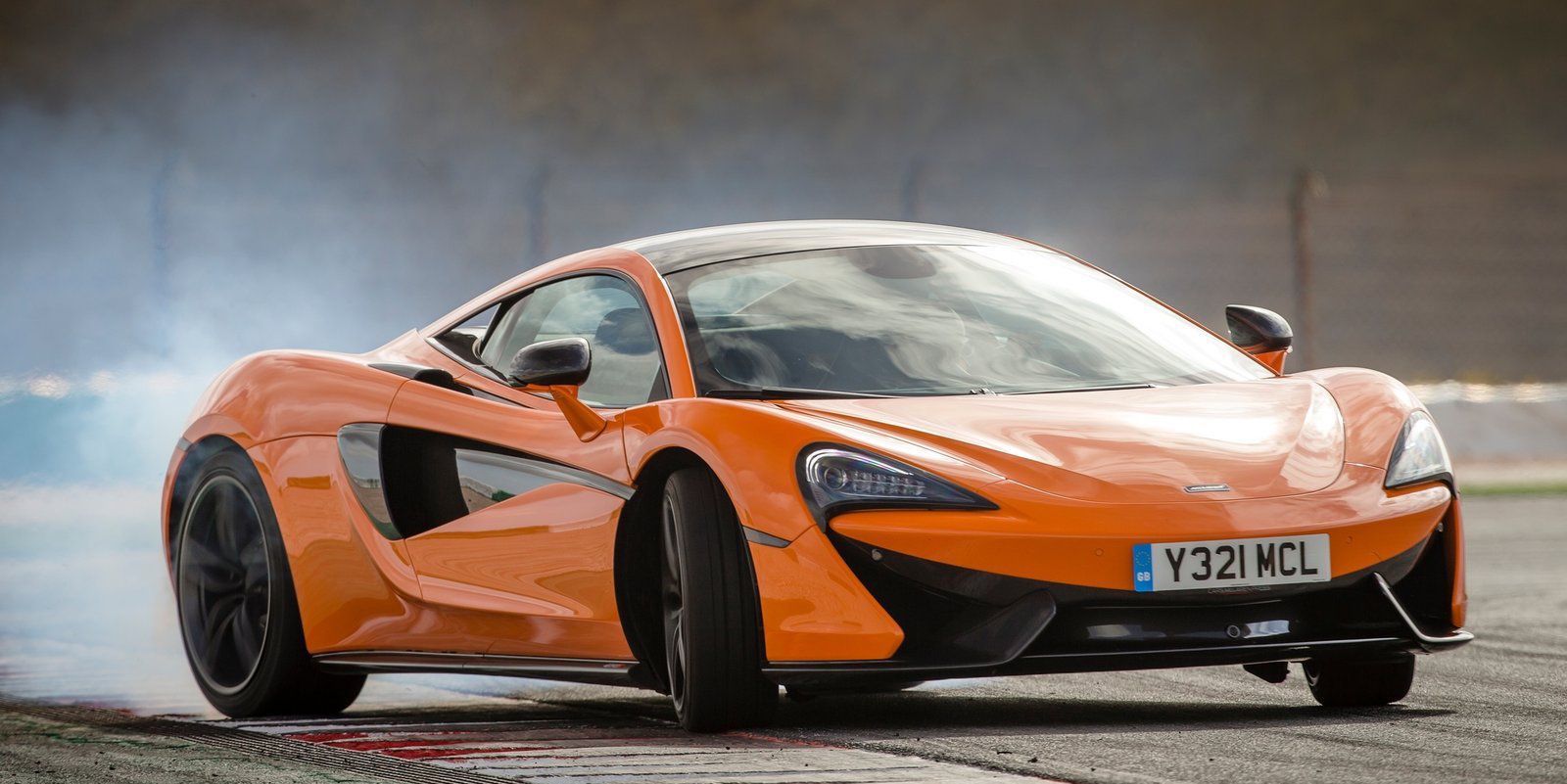 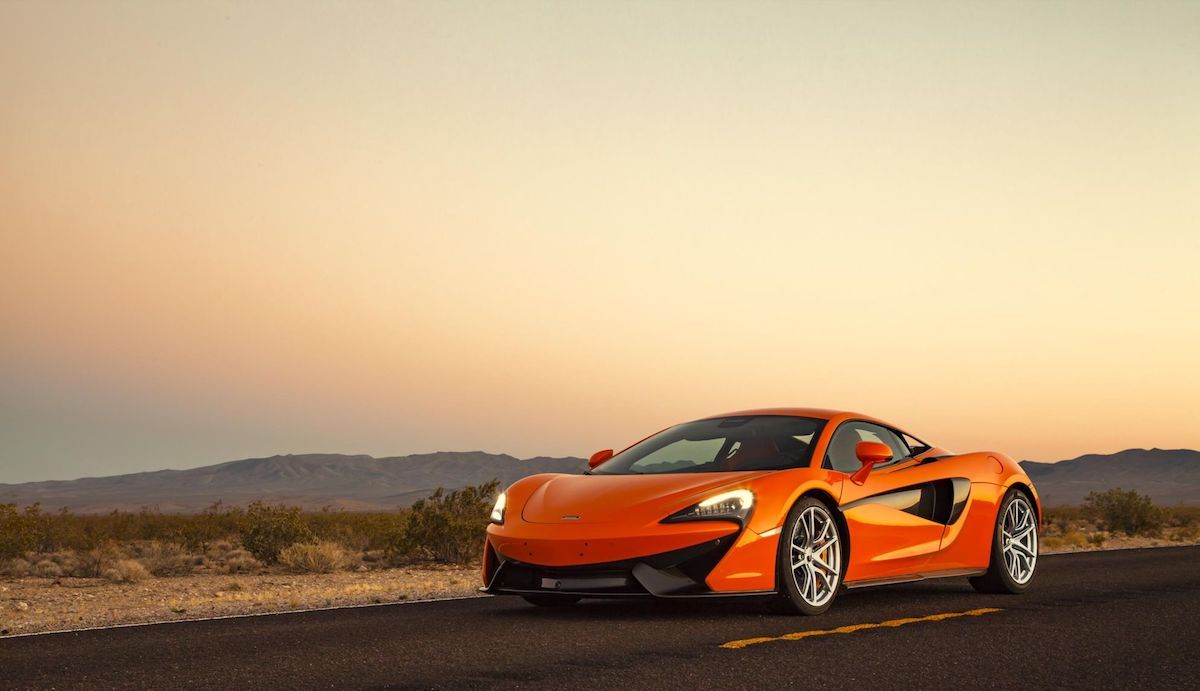 The 570S Coupé provides an addictive driving experience and offers the ultimate in driver engagement. With adaptive dampers and anti-roll bars, paired with a double wishbone suspension system, the 570S Coupé is as nimble and responsive as they come. Find out just how responsive and nimble for yourself, and hire the McLaren 570s with Supercar Hire. 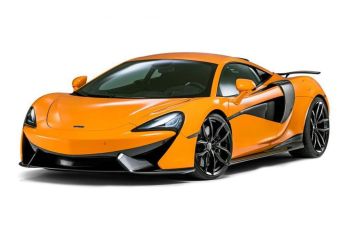