No brand and film franchise combination is as synonymous, or storied, as that of the partnership between James Bond and Aston Martin. It’s almost impossible to think of one without the other.

Throughout the James Bond series of films, Q Branch has always done its best to provide 007 with a variety of vehicles with which to battle his super villain enemies. More often than not, those vehicles have been made by Aston Martin.

Of the six actors to play the super spy, the late Sir Roger Moore is the only Bond not to have gotten behind the steering wheel of an Aston. Whilst various Aston Martin models have been used throughout the years, the most iconic of them all is undoubtedly the Aston Martin DB5.

It was the debut of the DB5 in the 1964 film ‘Goldfinger’ that first helped Aston Martin find prominence as the vehicular embodiment of style and sophistication. If James Bond was the guy that every man wanted to be, the DB5 was the car that every man wanted to drive. And with a further six film appearances, the DB5 has remained a presence in the life of 007 ever since.

The original Bond DB5 would go on to inspire a generation, equipped as it was with a number of gadgets, such as revolving license plates, a built-in telephone, twin guns behind the sidelights and extendible tyre-slasher coming out of the back wheel.

Whilst the whereabouts of the original ‘effects car’ equipped with all the gadgets for the movie is unknown - it was rumoured to have been stolen from a car collector in Florida - the ‘road car’ used for the driving scenes was last known to have sold for $4.1 million in October 2010, to American car collector Harry Yeaggy.

The latest news coming out of Aston Martin is that James Bond fanatics will now be able to get their hands on a ‘Goldfinger’ DB5. Because the manufacturer, in conjunction with James Bond production company Eon, is set to produce 25 Silver Birch coloured cars fully loaded with Bond gadgets. All you need, in order to get your hands on one of these limited edition non road legal cars, is £3.3 million. Oh.

What if you don’t have a few million quid laying around to purchase a DB5? Or the capacity to win one in a high stakes game of poker against a super villain a la Daniel Craig’s depiction of the secret agent in Casino Royale? What to do then?

You drive an Aston Martin Vanquish instead. 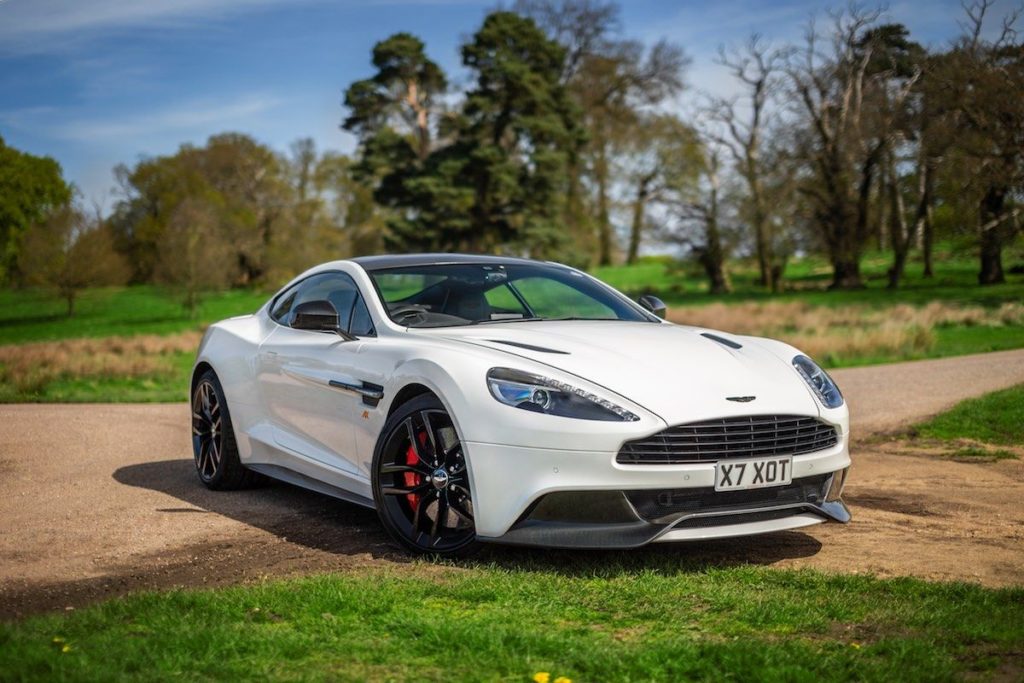 Whilst the Aston Martin DB5 is the most regularly appearing Aston in the franchise, it’s not the only one to feature. Bond has also found himself behind the wheel of a V8 Vantage Volante, DBS V12 and most recently a DB10 concept car created specifically for ‘Spectre’. Back in 2002, the original Aston Martin V12 Vanquish made its big screen debut in ‘Die Another Day’ with Pierce Brosnan in the driver’s seat.

This car had the platform for everything a Bond car needs. Lots of power on tap, the ability to traverse continents in pursuit of bad guys and drop dead gorgeous looks to match a Bond girl. In the movie, the car features in an iconic chase scene across a treacherous icy tundra. It was a hell of a car, earning itself a spot on our list of Supercars You Need To Drive. Yet, the current iteration is an improvement on its movie star forebear. It has even more power on tap, the ability to cover vast distances in more comfort than ever, and even better looks.

Those looks are thanks to the Vanquish’s swooping lines and styling ethos that relies upon the ongoing evolution of Aston’s signature look. The muscularity of the previous Vanquish has been replaced with something a little more elegant and in keeping with the modern line up. Making the Vanquish instantly recognisable for what it is, even with the boot lid that includes an integrated rear spoiler designed to look as if it is impossible to make.

The car is built using lightweight materials - aluminium and carbon-fibre in particular - and is happy to let you know about it, with exposed carbon fibre side skirt showing its all-carbon fibre body and carbon-ceramic brakes lurking behind the alloy wheels. Such lightness is required because of the monster of an engine located beneath the large bonnet.

That engine, the 6.0 litre, naturally aspirated, AM 29 V12, is the centrepiece of the driving experience and produces 580 bhp and torque of 465 lb⋅ft. Which means astonishing acceleration of 0 to 60 mph in 3.5 seconds, and a top speed of 201 mph. All of which is aided by the eight-speed Touchtronic III gearbox that is central to the Vanquish’s personality. It’s smooth and almost imperceptible at low speeds, but fast and punchy when you call for a maximum-revs upshift. It makes the most of the mighty V12 to which it is harnessed.

Add it all together and you have a front engined car that puts the Grand in Grand Tourer. Its comfortable, smooth and luxurious. You can drive the length of the country and it will not skip a beat. And once you’ve driven the length of the country, you can have confidence that should you now find yourself in a car chase, the Aston Martin Vanquish will once again step up to the plate and handle its business. Roaring it’s V12 to all and sundry in the process. 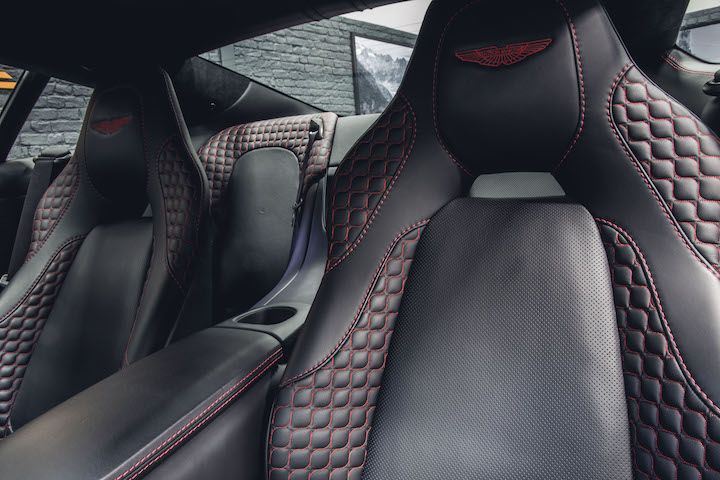 The interior of the Vanquish is one that favours craftsmanship over cutting edge design and has a snug, intimate feel. There are a multitude of upgrades available, with everything from coloured seatbelts, contrast stitching, leather headlining, carbon fibre paddle tips and piano black fascia available as options.

The infotainment system features a 6.5-inch screen, Apple CarPlay, and a 1,000-watt Bang & Olufsen audio system which is one of the best in the business. The 2+2 Vanquish has two rear seats which, whilst small, offer an obvious advantage over a regular two seater supercar. If there’s no need to carry kids onboard, then the two seater version of the Aston Martin Vanquish has a luggage shelf in place of the rear seats to offer up more storage.

As a true grand tourer, the Aston Martin Vanquish offers more than enough practicality for a weekend road trip. The 368-litre boot is large enough for luggage, or two sets of golf clubs if you’d prefer!

The Vanquish S is the self-styled Super GT. That cut above the regular Vanquish. Due to a redesigned and larger intake manifold, peak power in the S is up from 580bhp to 595bhp at 7000rpm, and whilst torque remains the same at 465 lb-ft of torque at 5500rpm, there’s more of it available at lower revs. This breathes a little more life into medium rev throttle response to complement the harder hit higher up. Overall the power delivery is smooth and linear, the engine springing to life past 4,000rpm.

Additionally, revisions were made to the Touchtronic III eight-speed automatic transmission to enable it to shift even faster while being smoother around town, while the suspension, damper internals, spring rates and anti-roll bar bushes have been returned. With launch control engaged, the 0 to 60mph time of the Vanquish S is 3.5sec.

The aerodynamic ability of the S is improved too, with increased grip at the front without losing stability at the rear. So handling balance through the corners has been improved, without any compromise of high-speed stability.

The redesigned front splitter reduces lift from 66kg to 18kg at 150mph, with the underside profile of the car shaped like the leading edge of a wing to accelerate the flow passing beneath the vehicle. The small ‘winglets’ at the splitter’s corners increase downward pressure on the upper surface whilst also guiding airflow past the front wheels, reducing turbulence and drag.

A final note is reserved for the Aston Martin Vanquish S Ultimate Edition, which is a special edition limited to 175 cars worldwide and is the final swan song and farewell for the Vanquish. Outside there are carbon side strakes emblazoned with rose gold lettering, inside, carbon tread plates and more script embroidered into the extravagantly quilted seat headrests and leather upholstery. 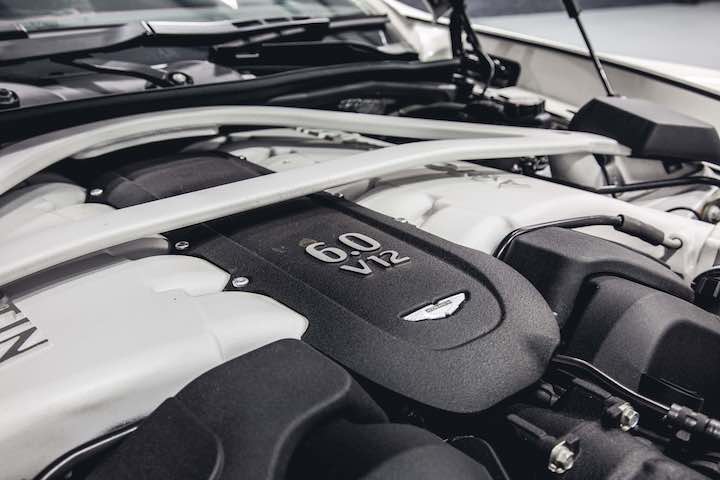 Aston Martin Lagonda Limited is the premier British manufacturer of luxury sports cars and grand tourers. Founded in 1913 by Lionel Martin and Robert Bamford, the company was later steered by David Brown, hence the ‘DB’ series of cars. Aston Martin sports cars are regarded as a British cultural icon with the company having held a Royal Warrant as purveyor of motorcars to the Prince of Wales since 1982. 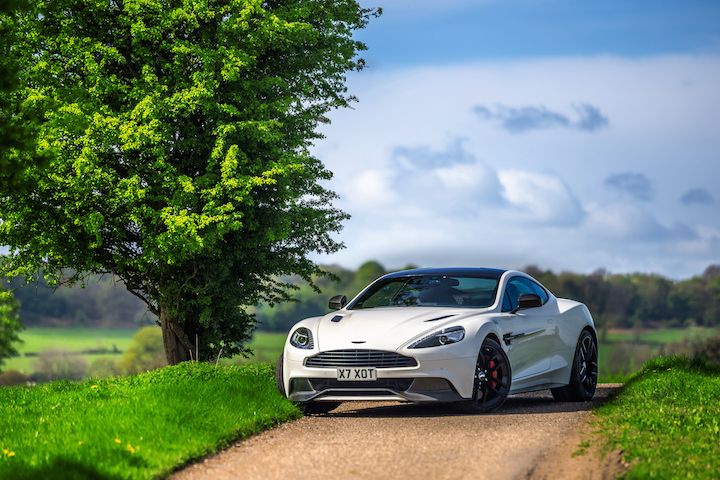 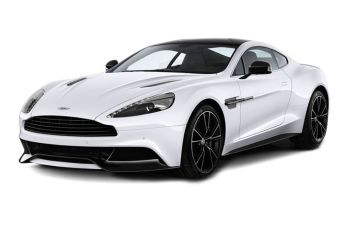