When Ferrari followed up the 458 Italia with a droptop version, the Ferrari 458 Spider, it came as no surprise to avid followers of the prancing horse. After all, the legendary Maranello based automotive company has a history of equally legendary convertibles. From the 250 GT California Spyder, through the 308 GTS and 575M Superamerica, Ferrari has dominated roofless driving.

Weighing 25 kilos less than the fabric roof of the F430, the 575M Superamerica inspired aluminium version opens and closes in just 14 seconds. Ferrari’s engineers have created an ingenious design that folds very neatly into two small sections and tucks away beneath the engine cover.

It goes without saying that the 458 Spider is a thing of beauty and deserves a spot on our 23 supercars to drive before you die list. With the roof up, the difference in looks between convertible and coupe is minimal. Sure the Spider loses the transparent engine cover for a painted cover with air intakes, but that only serves to add a tougher looking stance to the rear deck. A stance that is aided by the twin buttresses that rise behind the head restraints to add rollover protection and help manage airflow across the car when the roof is down. 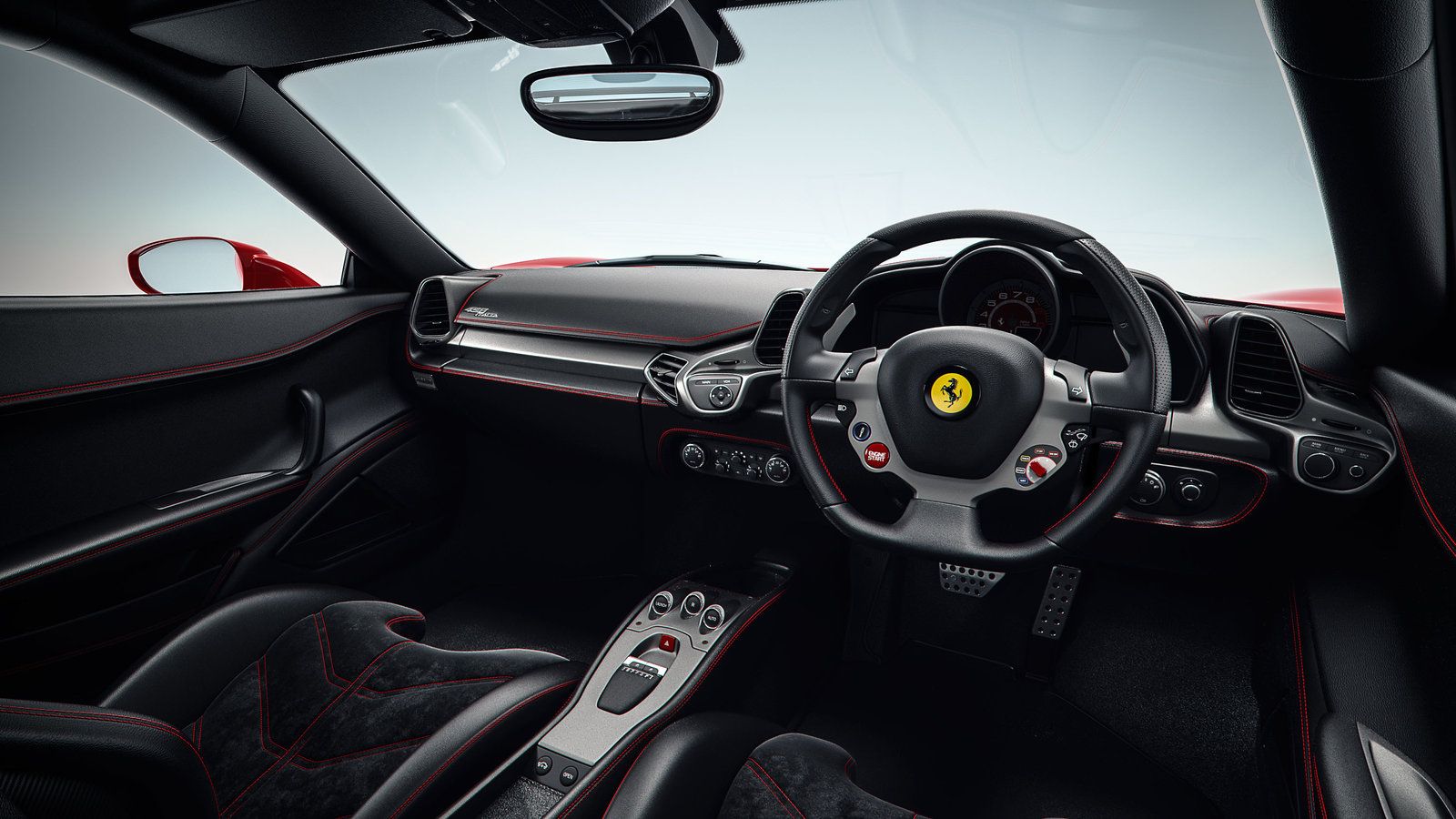 With its angled components and busy looking steering wheel, it’s clear from the off that the interior of the 458 Spider is designed with one person in mind: the driver.

The steering wheel is busy for a reason. Ferrari’s aim is to place all of the frequently used controls in a position where they can be accessed most quickly, so you’ll find them located directly at your fingertips like on a racing wheel. Allowing for the adjustment of settings such as the racing manettino - with its five driving modes - or the performance of more rudimentary tasks such as using indicators and lights, without ever removing your hands from the wheel.

Overall the cabin strikes a nice balance between comfort and performance. Whilst this is a driver's car, with pride of place on the dashboard given to an oversized rev counter, it is also a Ferrari. And that requires a certain level of fit and finish, with high-quality materials throughout.

Take the seats for example. To benefit handling and keep the centre of gravity low, they are low slung. But they are also nicely supportive, with excellent adjustability and electronic versions available.

The folding hardtop has a double curvature that helps the 458 Spider find extra headroom that would be unavailable with a traditional fabric hood and step away from the image of two-seater sports cars as cramped and claustrophobic. Thanks to the driver-oriented focus of the dash, the passenger, in particular, will find bags of room available to them. And talking of bags, there’s space behind the seats for a pair of custom made suitcases that supplement the already decent luggage capacity available from the boot.

Comfort levels are not deteriorated by lowering the roof thanks to the electric rear window that can be raised to act as a wind deflector and ensures the cabin remains free from buffeting. Alternatively, you can lower the rear window whilst the roof is up and sample the full sound of the V8 engine directly behind you.

The 458 Spider Engine and Performance 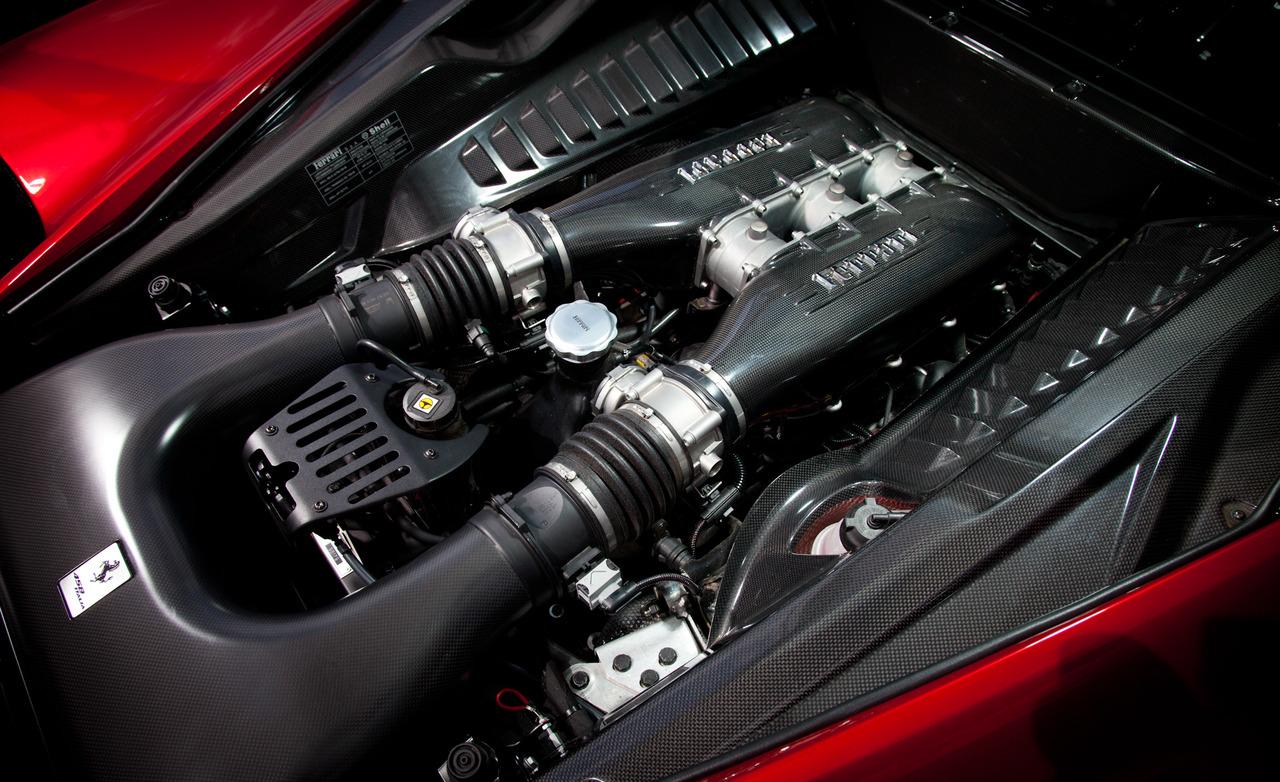 When it comes to the engine it’s all in the name, because this is a car that was named after the 4.5 litre V8 unit occupying the engine bay. A unit that is naturally aspirated (yeah that’s right, no turbochargers are fitted) and pushes out 562bhp. It will also rev to 9,000rpm, produce 348 lb-ft of torque at 6,000rpm, use its rear wheel drive to sprint from 0 - 62mph in less than 3.4 seconds and blast its way up to 199mph. 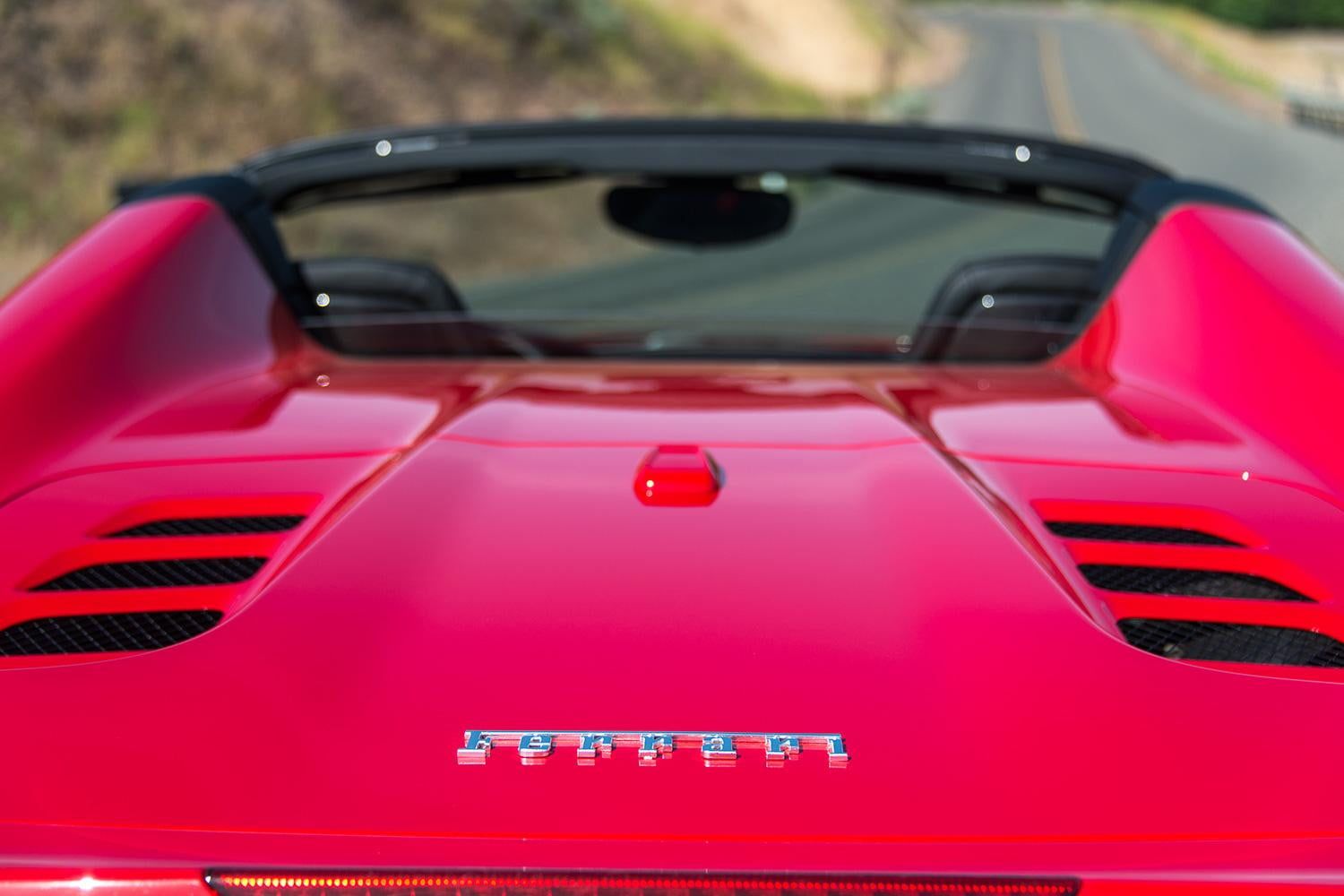 When released the Ferrari 458 Spider was available at a base price of £198,936 that included seven years' worth of free maintenance. It didn’t include many options though; if you wanted to spec your exotic car - maybe add lashings of carbon fibre for example - you needed to consult an extensive and expensive options list. Fully kitted out you could expect to pay up to £260,000.

Although the 458 Spider is now out of production, for a low mileage, later year model, you can still expect to pay around £190,000. Or for just the fraction of the price you can hire one from Supercar Hire.

The blend of performance and comfort transfers from the interior to the driving experience of the Ferrari 458 Spider.

When you engineer a car that weighs just 1,535 kg, has 58 percent of its mass over the rear and 562bhp on tap, you’ve got an almost guaranteed recipe for spectacular handling. And it’s safe to say the Ferrari 458 Spider cooks this recipe to perfection, leaving most competitors in the rear view mirror.

The lack of any discernible difference in performance and chassis dynamics between the coupe and the spider is an impressive feat of engineering. It’s impossible to make a convertible that has the structural rigidity of a full-bodied counterpart, but somehow Ferrari has managed to make the Spider feel every bit as responsive and rigid as the 458 Italia, despite its folding roof.

As well as a slick dual-clutch transmission serviced by paddle shifters, the 458 Spider has astonishing acceleration matched with supreme grip levels and an utterly nailed on the front end. The steering is precise, incisive and quick; the car responding immediately to input from the steering wheel. The weighting of the steering is perfectly struck, neither too light nor too heavy and consistently communicating to the driver the levels of grip available.

There’s very little roll thanks to the stiff springs and anti-roll bar. Grabbing hold of this car and bending it to your will from the driver’s seat is unnecessary, instead, it responds best to fluid movements as it flows around corners.

So how have they managed it? Firstly, the 458 Spider weighs only 50 kilos more than the coupe version. Secondly, there’s a host of technical wizardry going on to ensure you get ultimate performance, whenever you want it.

The 458 Spider has a sophisticated suspension system with magnetically controlled dampers. The system - called Magnetorheological Suspension Control 2, or SCM2 - has a viscous fluid inside the damper that is measured and adjusted magnetically every millisecond to maintain desired ride characteristics.

To boost traction levels, Ferrari’s E-Diff3 electronic differential has been deployed alongside Ferrari’s advanced F1-Trac - an intelligent traction control system that not only delivers power to the wheels based upon how much grip they have at that time, but also considers how much grip the software anticipates that they'll have, based on measurements taken from elsewhere in the car. This results in exit speeds from corners that are beyond comprehension.

The damper and traction systems are then combined and perfectly exploited by the driving modes available via the manettino. 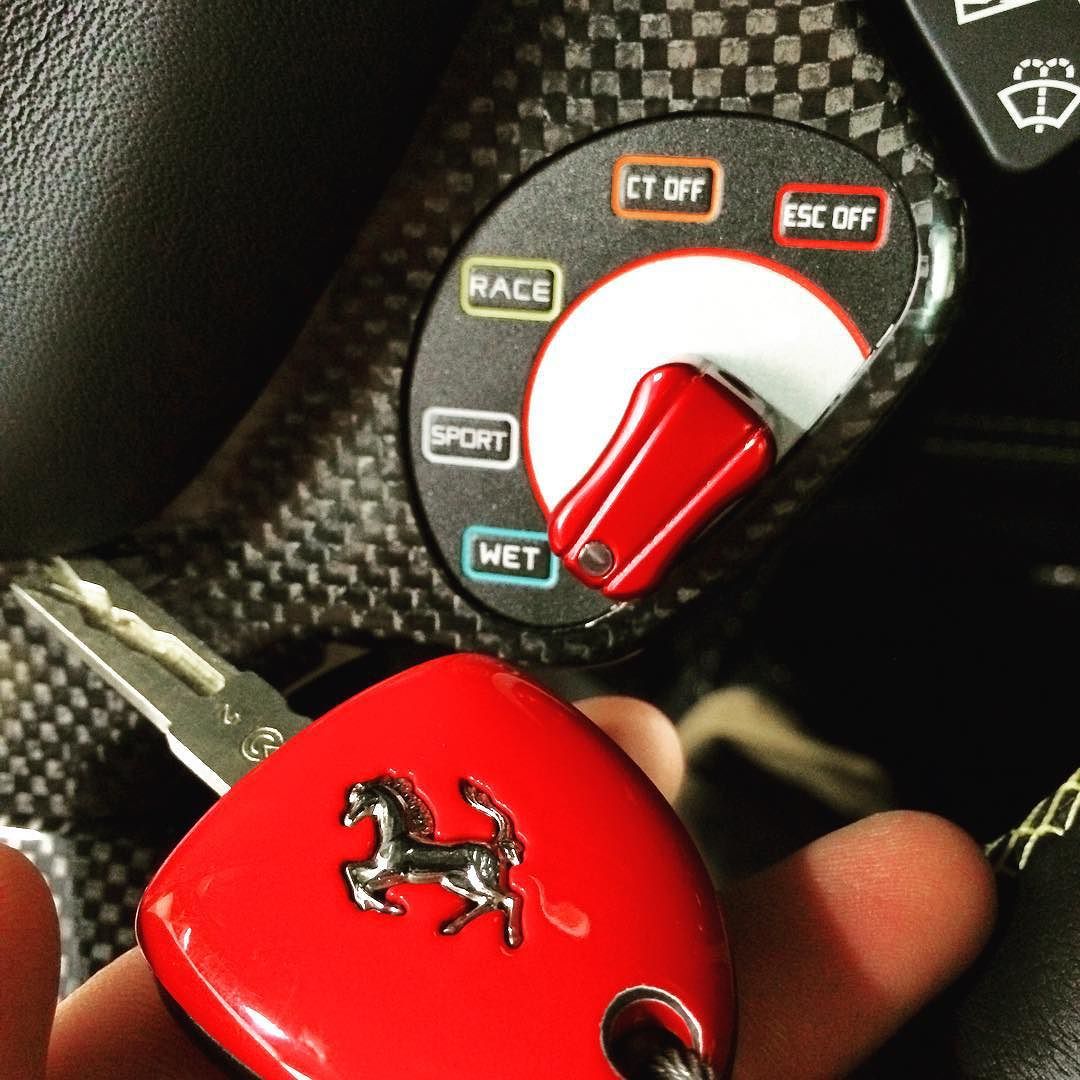 ‘Wet’ mode switches all the controls to maximum, has the dampers in their softest setting and puts the Spider in its easiest to drive set-up. ‘Sport’ and ‘Race’ ease the effects of traction and stability control, but keeps them ready to intervene if the car senses the driver is about to lose control. ‘CT Off’ and ‘ESC Off’ are best reserved for track action as they switch off the traction control and the electronic stability software respectively.

The final cherry on top is a set of carbon-ceramic brakes, sporting 398 mm diameter discs up front and 360 mm at the back, and Ferrari’s High-Performance ABS system. So when you want to stop, you stop.

Miraculously, none of this manages to detract from the comfort levels on offer in the Ferrari 458 Spider. Ferrari’s engineers have made various mechanical adjustments to finesse the car ever so slightly from its coupe counterpart. So whilst it’s still blisteringly fast when you want to drive it hard (its 199 mph top speed is 4mph down and its 3.4sec 0-60 mph time just a tenth slower than the coupe) it’s a little easier around town thanks to slightly softer damper rates and a gentler throttle map.

All in all, it’s a superior package to the coupe. The drop off in performance between the two is minimal, which allows the Spider to fully exploit its party piece: open-top driving. All that performance just seems a little more special when the sky is open above you and the wind is blowing through your hair. Especially when there’s a screaming V8 and tuned exhaust behind you.

How you can drive it 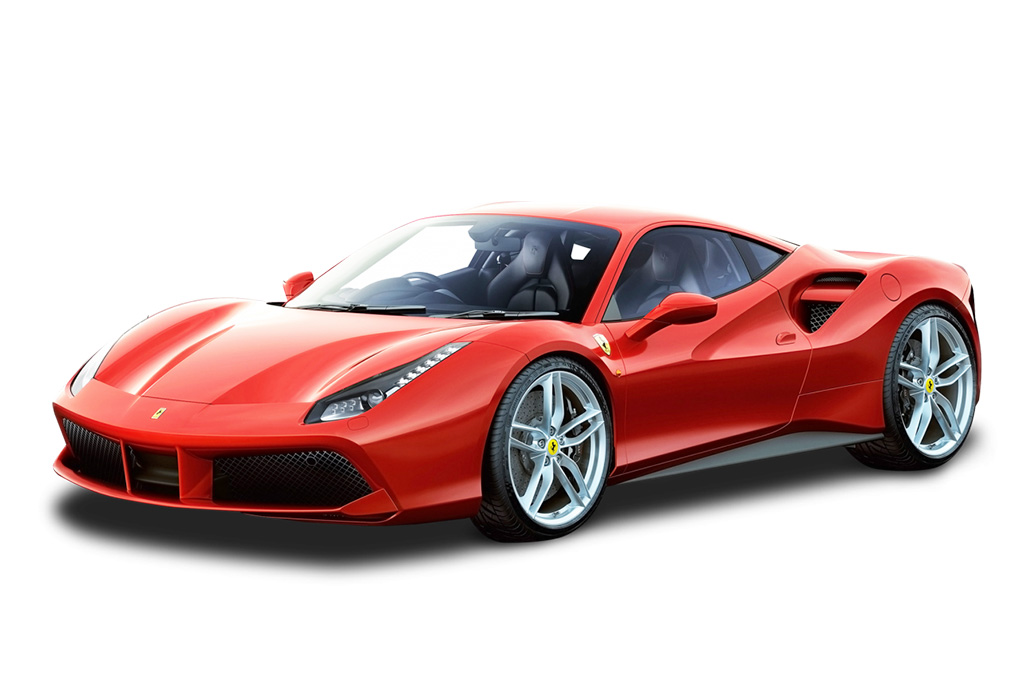